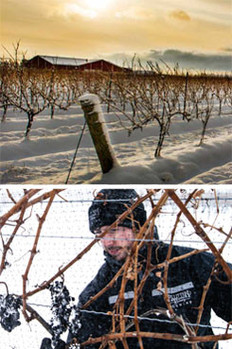 When you’re responsible for the well-being of grapevines at a successful winery, the entire business is essentially in your hands. Such is the life of Jamie Slingerland, director of viticulture at Pillitteri Estates Winery in Niagara-on-the-Lake, Ontario. In his 29 years of growing and harvesting grapes, he has logged many chilly, sleepless nights in the field protecting fruit buds and vines from the cold. But he has more to worry about than his personal comfort.

“My crop in the field is worth over $5 million once it is converted to wine. If we don’t have grapes, we don’t sell wine. Our vines are worth $2 million, and if we have to replace them, we’d lose three to four years of crops, and it would threaten the jobs of the 43 people who work for us,” Slingerland notes.

To eliminate these risks, he installed Sensaphone devices to remotely monitor vineyard temperature.

A third-generation family business, Pillitteri Estates Winery is a major independent producer of wine in an industry dominated by corporate giants. The Pillitteri family has farmed at the winery site for 50 years and opened the winery, situated on 110 acres of vineyards, in 1993. They have grown to become a world leader in producing Icewine. These wines require the grapes to undergo a hard freeze after they are ripe, but while still on the vine. Because the grapes hang on the vine for several months following the normal harvest, they are tricky to maintain. The freeze must come before the grapes dry up and are eaten by birds. But, if the freeze is too severe, they will not produce juice.

The Sensaphone system constantly monitors temperature, alerting Slingerland when it drops low enough to take action. Wind machines are then turned on to pull warmer air down to raise the temperature around sensitive grapes.

Pillitteri dedicates 50% of its production to Icewine and makes more than 20 varieties. Their Icewines and table wines have won first place in every major world wine competition for a total of more than 800 awards. The viticulture research community recognized Slingerland’s vineyard knowledge and success. They named him 2015 Grape King, a title bestowed upon the grape grower with the best vineyards in Ontario. Judges include members of the Ministry of Agriculture and Food, the Cool Climate Oenology and Viticulture Institute at Brock University, Vineland Research and Innovation Centre and the University of Guelph. Winery patriarch, and Slingerland’s father-in-law, Gary Pillitteri, was named Grape King in 1981.

Slingerland says of the honor, “Having technology such as wind machines and the Sensaphone system has enabled me to utilize my skills to obtain the best results in harvesting my Icewine grapes.”

Every Minute and Degree are Critical

For the past ten years, Slingerland has been relying on Sensaphone devices to monitor vineyard temperature. They notify him when it gets cold enough to require the use of his wind machines to minimize injury to crops. Although the wind machines have sensors and auto starts, he needs to be alerted before temperatures reach dangerous lows. “If I am just a minute too late, it’s all over,” Slingerland explains.

The Sensaphone system’s control unit located in the barn connects to the phone line and to sensors that are positioned 150 feet to 200 feet away in two different vineyard locations. At each location, the sensors are positioned on the grape trellis at three heights from 2 ½ feet to 5 ½ feet above the ground. The sensors constantly communicate with the control device and are programmed to call Slingerland when temperatures hit –17 °C (1.4 °F) or –18 °C (-0.4 °F).

“Critical damaging temperatures are colder, but I need to be ready and closely watching them because the machines start easier at –17 °C, and they take time to start, warm up and operate. I also need to be notified and prepared for a sudden cold dip,” he adds.

He also uses the wind machines for frost control in the spring and fall, reprogramming the Sensaphone monitors for different damage temperatures. At a cost of $600 per hour to run his wind machines, precise operation of the machines also impacts his bottom line.

Slingerland has been harvesting Icewine grapes for 29 years. Prior to using a remote temperature monitoring system, he relied upon computer weather forecasting and conducted many field inspections on cold nights. Life before technology resulted in numerous unnecessary visits to the field.

“The old manual method required ten times more field visits. Field visits are still required for physical verification before deciding my course of action, but I now have a fraction of the false field checks,” he notes.

Before he discovered Sensaphone monitors, he used battery-operated remote sensors that provided a beep alert. However, they were limited to a 100-foot range and required lithium batteries that died during extreme cold. He also had to keep the monitor beside him at all times and couldn’t check the temperature when he was away from the house.

“The Sensaphone monitors have improved my life, so I can now get sleep instead of being up all night for many nights of the year,” he says.

In addition to using the monitors to warn him of dangerous temperatures, Slingerland uses them during harvest time. He has learned to gauge the precise start and cut-off time for harvesting based upon the exact warming of the field. This information extends pick times and lets him stop at the right time if the crop is not cold enough to be picked.

“It is a crucial science for me. There are no longer unpleasant surprises of colder temperatures than predicted. We usually pick at night, so it wakes me up and I go,” he explains.

Slingerland also uses a Sensaphone monitor in the house for vineyard helpers when it is unoccupied. Last year, a repairman neglected to turn on the furnace after a service call, resulting in frozen pipes a week before the house was to be occupied.

Now, when the temperature dips below 10 °C (50 °F), he gets a call. He also notes the added benefits of monitoring for fire or freezing water that would burst pipes.

“The Sensaphone monitor has improved our operation immensely. I have confidence in the accuracy of the sensors and can be more strategic with my decisions to harvest,” Slingerland adds.