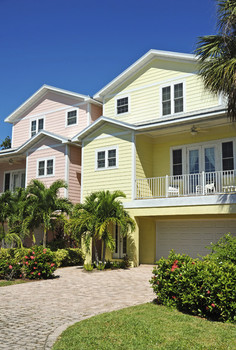 Naples, with its sugar-white beaches along Florida’s Gulf Coast, seems ideal in many ways. Known for its fine weather, outdoor recreation, shopping and dining, it’s a great place to visit, let alone live. But, as many residents know, it takes diligence to protect a home from the extreme heat and humidity.

For those homeowners who travel frequently or live there only part of the year, minding their property is imperative. Although many employ a house watcher to check on their homes once a week or twice a month, that option doesn’t provide 24/7 surveillance.

A/C is a homeowner’s best friend

One Naples homeowner has been using a Sensaphone remote monitor since 2004 to ensure peace of mind when he and his wife are away. He uses a Sensaphone 400 unit primarily to monitor air conditioning in two zones of his home. Mold growth is a serious threat to property and health in South Florida,” he explained. “If the air conditioning is down for an extended period, the environment in the house becomes extremely humid. Crown moldings, baseboards, and wood furniture can crack after being exposed to these conditions. Remediation costs are quite high and insurance companies are limiting coverage for mold damage.”

Thanks to the Sensaphone device, he was alerted to an air conditioning problem that likely would have gone unnoticed. He received an alert indicating that one air conditioner was not turning on at the pre-set temperature setting. But, when the house watcher arrived, the A/C was working, so he was unaware of the air conditioning downtime. Over the weeks, this extra period of warm, humid air could have caused damage to the home. This early detection of a malfunction led to prompt corrective action.

“A human house sitter can’t provide around-the-clock monitoring, and homeowners might not know about a problem for a week or two,” he said.

Additional advantages in the home

In addition to remote temperature monitoring (from -20 °F to 150 °F), the Sensaphone 400 device can detect water pooling on the floor from burst pipes or flooding. Users also use it to detect humidity, smoke, power failure and high noise levels, like the sound of an alarm.

This Florida homeowner also uses the Sensaphone 400 device as a backup to his security alarm system. The motion detector sensor can alert him if an intruder enters the house and when his home watch person arrives. He also uses the Sensaphone unit to let him know if he has telephone messages. “I placed the device near the telephone, and if I hear it beeping when I call the Sensaphone, I know to check my messages. This saves time, because I don’t have to call the phone for messages if I don’t hear the beep,” he noted.

Because Florida is the “lightning capital of the U.S.,” he finds it reassuring to know exactly when the electricity goes off and when it comes back on again, so he can take action if his house is struck by lightning. The device’s 24-hour battery backup ensures reliable operation during a power outage.

Although Floridians don’t need to worry about ultra-cold weather, property owners in northern states typically use the Sensaphone 400 device to monitor the temperature at unattended homes to alert them before pipes freeze, burst and cause costly water damage.

Additionally, snow and ice storms can bring down power lines. Loss of electricity leads to loss of heat, which can result in frozen and broken water mains. Early knowledge of changes in environmental conditions in a vacant home can lead to faster response time. That extra time allows the property owner to contact help, fire up a generator and prevent thousands of dollars in damage.

The Sensaphone 400 device also has a built-in output relay that can switch external devices on or off automatically – such as activating lights on those long, dark winter nights.

You don’t have to be a techie to install a Sensaphone device. Just about any homeowner can set it up. Accessing the device remotely is easy as well. Homeowners can call in to check the status and make programming changes. They have the added assurance that Sensaphone’s free tech support personnel are available to walk anyone through the process.

As our Naples homeowner pointed out, “The Sensaphone monitor is fantastic. It’s simple to operate. And knowing what’s going on at the house while we’re away is quite comforting. In addition, tech support has been great, although I have only needed them twice in eleven years. This is my second Sensaphone unit, as I upgraded from the first one. I simply cannot leave my home for an extended period of time without it being on.”