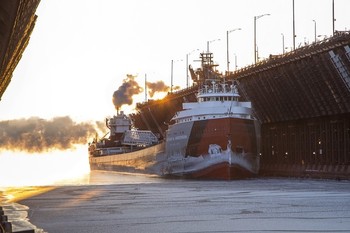 David Deltano has been managing fleets of cargo ships for over a decade – in salt and fresh water. Based in Duluth, Minn., as a fleet manager for Keystone Shipping, Deltano is responsible for vessels while they are en route and at port.

Vessels routinely face winter lay-up January through March, as well as lay-up in shipyards for maintenance and tonnage reductions. During these times, they are largely unattended, especially on the weekends, and subject to damage from unexpected incidents like leaks, fires and power outages. A remote monitoring system safeguards the vessels, and the company recently upgraded to Sensaphone systems for additional protection and convenience.

Keystone’s fleet in the Great Lakes is used only in fresh water and are still in excellent condition. However, they are particularly vulnerable to wear and tear as well as system failures during lay-up periods. When events like a power outage at the dock take the ships’ systems offline during the evenings or weekends when no one is onboard, damage can occur and go unreported for hours and even days.

Remote monitoring systems watch key ship conditions such as the status of the smoke alarms. Fires and heat that trigger smoke alarms activate a notification process so that ship keepers and port personnel can take immediate action. Systems also monitor high water, which results from leaks.

Although the ships aren’t laid up in deep enough water to actually sink, their expensive electronics and other components are subject to water damage. Destruction can also occur if heating systems fail, resulting in engine room temperatures that are too high or low.

Keystone has always used a remote monitoring system to protect its fleet while in lay-up. But the system had some shortcomings – its greatest being that it required a telephone landline connection. Fewer and fewer ports are providing landlines these days, narrowing Keystone’s lay-up options.

They wanted a system that would connect to their ships’ onboard network consisting of cellular systems backed by satellite. When visiting a port in Erie, Pa., Deltano heard about the Sensaphone® Sentinel™ remote monitoring system that could connect to an Ethernet or cellular network. “I kept hearing the Sensaphone name,” said Deltano. Great Lakes Electrical Services in Erie, Pa., conducted the first installation and commissioning December 3 and found the system very user friendly. “Additionally a satellite communications provider mentioned he has seen quite a few Sentinel systems used successfully on many private yachts, and an electrician in Duluth said he had used it recently in a land-based situation.”

Sentinel Connects to the Ethernet

After success with the first Sentinel system, Keystone is in the process of installing the units on an additional eight vessels. The monitoring units connect to the ships’ onboard Ethernet network, and each unit has 12 channels, which is sufficient for Keystone. Beyond testing various scenarios, they haven’t had any “real” alarm incidents yet. However, Deltano has the Sensaphone app installed on his phone and has been checking ship status regularly.

The Sentinel system has a number of other powerful advantages over the previous system, including its ability to simultaneously notify many people according to their preference of phone call, email or text. “Our old system was pretty basic,” said Deltano. “Like a monitored home security system, it called the first person on a list when an alarm occurred. If it didn’t reach that person, it called others on the list in a sequence. In many cases the system sent a generic ‘common fault’ alarm, so we would have no idea what type of incident had occurred. The new system sends specific alarms such as ‘low temperature in engine room 1.’ Another great feature is it sends another message when the alarm returns to a normal condition.”

Alarms When Connection is Lost

The previous system sent an alarm when it detected a threatening environmental incident, but “went silent” if the phone line was cut, disconnecting communications. Keystone wanted a way to be sure the system was up and running at all times and able to successfully communicate alarms.

The Sentinel system is self checking, meaning it sends an alarm if the system loses communications for more than 30 minutes. The app would also show an “alarm” status instead of “system OK.”

Phone and Desktop Apps Give Peace of Mind

The monitoring system is cloud based, so all sensor readings are stored in the cloud and can be viewed in real time via the Sensaphone app on a phone, tablet or PC. Data can’t be lost and there is limitless information storage.

Deltano added, “I just like being able to open the app and see the list of conditions saying ‘OK, OK, OK.’ I was easily able to check on my ships even while traveling.”