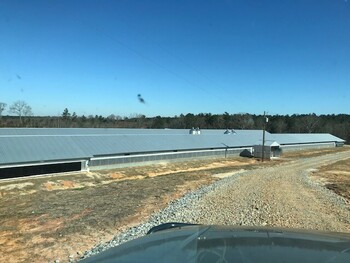 Commercial chicken farming is big business in Mississippi. That’s why Drew Cherry takes his job very seriously. He installs and maintains remote monitoring systems in many of the farms in the state and surrounding areas that produce chickens for companies like Tyson Foods and Peco Foods. Farmers rely on him to set up systems to protect more than $150 million worth of birds.

“A farmer’s life’s work can be wiped out if the heating, cooling or power in a chicken house malfunctions,” explained Drew, who has been providing remote monitoring solutions to chicken farmers for 18 years.

According to the Mississippi State University Extension Service, in 2021 the state’s poultry industry saw a nearly 40% increase in production value totaling an estimated value of $2.65 billion. The poultry industry is broken into three segments: broilers, chickens and eggs. The broiler market is an estimated $2.42 billion, and the estimated value for chickens that produce table eggs stands at $2.7 million. Eggs are valued at $235 million.

The typical farmer will have two to eight chicken houses, with each house holding anywhere from 23,000 to 33,000  birds. Certain operations are even larger, and some of Drew’s customers have up to 16 houses.

A History with Sensaphone

The previous owner of the business, Gary Rawson, started with Sensaphone’s 400 and 800 auto dialer monitoring systems to keep tabs on the temperature in the chicken houses. He then moved on to Sensaphone’s 1400 and 1800 auto dialer systems, which can provide more sensor options and better protection to the Sensaphone’s electronics. These devices connect to a standard telephone line. As operations grew, Drew graduated to the Express II monitoring system, which allows for up to 40 total sensor inputs and up to 16 output zones. The Express II system can notify up to 48 people by voice phone call over a standard line in the event of an alarm.

Today, Drew installs an innovative, mostly wireless network using Sensaphone’s WEB600 monitoring system and the cellular Sentinel PRO. The WEB600 is a cost-effective device that lets users check the status of sensor readings and make programming changes through a designated web page. Sentinel PRO monitoring system with cellular modem is cloud-based and can monitor Modbus inputs. It is an ideal solution for locations that don’t have access to reliable landlines or a network internet connection.

In the chicken houses there are eight or more fans on one end and a water cooling system, called a cool cell, on the other that’s used to bring down the temperature by 10 to 15 degrees. Drew monitors the temperature in the middle of the house and keeps it at a set point depending on the age of the birds, for example 75 degrees, with the sensor range at a high of 80 and low of 70. He also sets the system to monitor power on both legs of the breaker box. In addition, he sets up sensors to monitor for high or low static pressure and water pressure. He can also program the system to monitor when the farm’s controller is in an alarm state. This is important because the controller switches the power on and off to the lights, fans, water, and feed lines.

When Drew was working mostly with the Express II devices, he kept running into a problem with lightening and the telephone landlines. In a region where storms are frequent, lightening would often knock out the phone lines and render the Express II units inoperable or even “fry” them and other electronic devices. He needed a wireless solution and installed his first cellular Sentinel PRO device about a year ago.

Taking it a Step Further

Drew and the experts at Sensaphone devised a way for a cellular Sentinel PRO device located in a central chicken house on a farm to receive input from the WEB600 units located in the other houses. This way, the farmer and his crew can read sensor data in real time from all of the houses on an app on their mobile phone.

“The farmers can view all the information in real-time on the app. They really like that. They were used to the dial-in dial-out systems, and now they can see what they are programming.  And if they push something wrong, they can hit the revert option or call me and I can take care of it remotely,” Drew said.

In addition to using the cellular Sentinel PRO to address the lightening risk, Drew uses a WiFi adapter, so he doesn’t need to run network lines. This monitoring solution is practically wireless, except the electrical wire underground from barn to barn.

Drew shared a couple of examples of how the Sensaphone monitoring devices work to prevent disaster. After installing a system at a one-house farm over Memorial Day weekend, he received a call from the farmer a few days later saying it saved his entire flock because he lost power and the control switch failed to throw at the generator shed. For another farmer, Drew installed a Sensaphone monitoring system in early January. Two days later, the farmer called to say he got notification that it was 32 degrees in the chicken house.

“I told him he better get there fast. Two houses were saved just a couple of days after the monitoring system was installed,” Drew added.

Drew and his farmer customers are enjoying the usefulness and convenience of the Sensaphone system. “The farmers who have it like to show off the app to the ones who don’t,” he said. “I’ve had farmers look at the real-time information on the app, and they told me it gave them chills. They were so excited to be able to see that in actual time.”

Based on the success he is having with Sensaphone systems at chicken farms, Drew and his son, who recently joined the business, plan on branching out in markets where they see a need. These include HVAC, refrigeration and cannabis greenhouses now that the state of Mississippi recently legalized medical marijuana.

“There’s a lot of potential. And because I have experience that proves the Sensaphone devices work so well, they can kind of sell themselves around here,” he noted.

Drew Cherry can be reached at 601-900-5788 or WirelessMonitoringSystems@gmail.com.