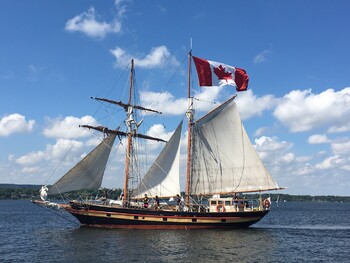 The St. Lawrence II is not just a beautiful tall ship. She serves as a platform for outdoor education and personal development experiences for youths and adults to inspire leadership, team building and problem-solving skills. Since 1954, Brigantine Incorporated, a registered charity, and its Tall Ship Expeditions Canada have been committed to providing universal-access adventure programs, preserving maritime skills and heritage and caring for the St. Lawrence II.

Two years ago, the crew installed a Sensaphone Sentinel remote monitoring system to alert them when unexpected changes in conditions threaten the wellbeing of the ship.

Based in Kingston, Ontario, Canada, captain and executive director Chris Chafe oversees the programs and the ship with a team of volunteers. The youth programs are supervised by experienced peer leaders who are past participants. Chafe was first introduced to the St. Lawrence II when he was 15 years old and spent many years as a volunteer. He returned to his current role 7 years ago.

The St. Lawrence II generally sails from late May through October, with excursions lasting generally 5 to 12 days from Kingston to Lake Ontario.

“Our mission of personal development through sailing expeditions helps people of all ages become more confident. The ship is a community asset, and we make it accessible to as many as possible,” Chafe explained.

The St. Lawrence II was built in 1953 and renovated in 2017. Chafe and technical engineering volunteer Allan Yates work with a team of helpers to maintain the tall ship. Because she is docked and unstaffed during the winter and often on weekends in the summer, they installed Sensaphone’s Sentinel remote monitoring system as the building block of their disaster avoidance plan.

Before installing the Sentinel system, the crew monitored the St. Lawrence II manually onsite. While unattended, the vessel sank two different times at its moorings. In both cases a failure point in the ship’s hull below sea level caused an ingress of water. Due to Transport Canada regulations, bilge pumps cannot be automatically enabled because of the possibility that they will contaminate the environment with diesel fuel.

“It is not uncommon to have areas of damage that you can’t see. We replaced a lot of the hull plating for that reason, but it’s impossible to know that everything is in good condition,” Chafe said. “With remote oversight, we can monitor the bilge alarm, temperature and the power and send someone to the boat immediately when we get an alarm.”

Because the sailing season is only about five months of the year, the vessel is often docked and unoccupied. As history demonstrates, damage to the hull can cause leaking, flooding and potential sinking. Other threats to the ship while unattended include power failure, which can disable refrigeration and other systems. Although there is a large battery bank onboard, it can provide power for only several days before it needs to be recharged.

During the winter, the engineering room is kept warm with portable heaters plugged into a shore power connection to prevent water from freezing in the main diesel engine and other equipment. If the temperature of key compartments of the vessel drop below freezing, expensive damage will occur.

Sentinel at Work on the St. Lawrence II

The Sentinel base unit is located in the vessel’s engine room, housed in a dedicated cabinet with other key equipment, including many of the sensors. The only potential concern with housing the unit in the engine compartment is the ambient temperature when the engine is running in the summer. To remedy the situation, the Sentinel is monitoring the temperature inside the enclosure. If it rises above the pre-set temperature range, it will notify the crew.

The Sentinel system monitors the float switches in the bilge compartments to keep tabs on the water level. Relays are used to monitor AC power and systems such as the generator, main engine and various circuit breakers. The dry contacts from the relays provide good isolation between the onboard systems and the Sentinel, improving overall robustness of the monitoring system.

The crew uses type 2.8k temperature sensors throughout critical areas of the ship such as the engine room and wardroom to alert them when readings fall below freezing. Future plans include upgrading to the Sentinel Pro because it provides MODBUS sensor connectivity. This will enable monitoring, and logging, of AC voltage, AC & DC currents and even inclination of the vessel.

The St. Lawrence II has not experienced a flooding emergency in the past two years. However, several times during the winter, the AC power failed. This is potentially problematic because the temperature regularly falls well below freezing, and water often cannot be completely drained from all the ship’s systems. Therefore, the crew must keep critical areas on the ship heated. Freezing of water in the main engine or other components would result in expensive repairs.

Several times during the winter, the Sentinel system sent an alert that AC shore power had been lost. In all cases, the marina where the vessel is docked had lost power to the pedestals from which the ship draws power. With this immediate notification, crew was dispatched to the ship and to run additional power cables to the working pedestals. This fast response prevented the freezing of the ship and loss of key machinery.

When sensor readings fall out of the pre-set range, the crew receives alerts via email notification. Conducting a remote review of system conditions or historical reports is typically performed through the web interface, and less frequently via the mobile app. This data is crucial for post-summer cruise systems analysis, in addition to being a troubleshooting aid for active issues.

“Knowing with absolute certainty that a leak has not occurred in the vessel and that the power and heat are operational is an untold improvement over previous years,” Yates said. “Prior to this, periodic checks were made on the vessel, and sometimes there was a bad surprise. Catching issues right away prevents much more costly issues that can quickly arise, to say nothing of potential environmental damage.”

Although there are marine-specific monitoring systems available, they have fixed and limited functionality. Yates had used a Sensaphone device about 30 years ago when he was operating a home automation business, so he investigated the company’s current monitoring technologies to see if there was a fit for the ship.

The Sentinel system provides the ship’s crew with more flexibility for current and future monitoring needs. For example, the cloud interface has a high degree of configurability and reporting ability, both of which are key to effectively managing the ship.

Cloud management of the Sentinel system is invaluable for analysis of system performance, and the continuous data logging provides access to all systems data regardless of the vessel’s location. Another benefit of using the Sentinel is that it stores data locally when the vessel is too far from the shore-based cellular network and connectivity is lost. When connectivity is restored, the system uploads all the locally stored data.

The continuous data logging to the cloud also provides a mechanism for remote assistance and troubleshooting of the vessel’s systems. While the vessel is sailing during the summer – whether it be around the great lakes, down to New York City, or out to Newfoundland – technical assistance is not close at hand. The cloud reporting enables onshore crew to monitor the ship’s systems and provide proactive recommendations. In the event of any issues, the data leading up to the event and the current state of conditions are invaluable in providing troubleshooting assistance.

Yates also is using the system’s flexibility to design a customized web display for a simple, at-a-glance dashboard of key parameters. He is using the Sentinel cloud API to retrieve the cloud logged data every 30 seconds and updating it to a simple web page. The intent is to provide a mechanism for the captain, key crew members and volunteer back-office engineering staff to quickly view the status of the ship for peace of mind, and as a first step in responding to any received alert.

“The Sentinel system gives us three key benefits: situational alerting, remote monitoring and historical reporting. All of these provide insights that keep the ship in safe working condition year-round,” Yates noted. “And working with Sensaphone made the process easy. They handled pre-sales technical questions quickly and efficiently, which was a great indication that post-sales support would be equally helpful. This is a valuable aspect of any partnership.”